The City of San Clemente spans fifteen square miles of coastline and scenic foothills. The location of the City, long admired by explorers and passing settlers, remained virtually uninhabited until 1776, when Mission San Juan Capistrano was established by Father Junipero Serra and led both Indian and Spanish settlers to set up villages nearby.

Property rights to the land exchanged hands several times, but few ventured to build on it until 1925, when former Mayor of Seattle, Ole Hanson purchased and designed a 2,000 acre community. Hanson believed that the area’s pleasant climate, beautiful beaches and fertile soil would serve as a haven to Californians who were tired of “the big city”. He named the City “San Clemente” after San Clemente Island which was named by the explorer Vizcaino in 1602 after Saint Clement, the patron saint of November 23, the day of Vizcaino’s arrival on the island.

Hanson succeeded in promoting the new area and selling property to interested buyers. His “San Clemente by the Sea” was to consist of buildings built in the classic Spanish style with red tile roofs. He built public structures such as the Beach Club, the Community Center, the pier and Max Berg Plaza Park, which were later donated to the City. The area was officially incorporated as a City on February 27, 1928.

In 1969, an event occurred which accelerated the growth and reputation of San Clemente. In that year former President Nixon purchased a Spanish mansion in the southern part of town that Hamilton Cotton had built in 1927. This “Western White House” became the site of numerous historical meetings.

Despite rapid subsequent growth, the City today maintains its small-town atmosphere. The City now houses a TRW plant, located just north of the San Onofre Nuclear Generating Station (SONGS) and camp Pendleton, bounded on the east by the Cleveland National Forest and on the west by the great Pacific Ocean. San Clemente is the site of two annual festivals; Fiesta La Cristianita, celebrating the first Christian baptism in California including a parade and block party and the Ocean Festival, which features three days of aquatic and endurance competition.

The City’s population and service area are expected to double over the next 20 years as various development projects are completed in the back country. These new residential projects will be accompanied by commercial and retail developments to provide for a balanced and economically stable community.

If you wish to rent a 12 or 15 passenger van for your trip to San Clemente, our passenger vans are easy to reserve. 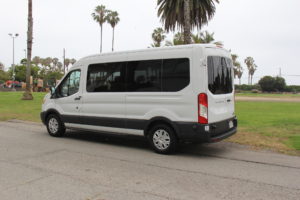 For more information about the city of San Clemente, please visit their website here.