The “Jewel of the Missions” has been the center of Orange County since its founding by Padre Junipero Serra on November 1, 1776.

The Mission’s namesake was Giovanni de Capestrano, who was born in 1386. He was a respected warrior and missionary, who died October 23, 1456. He was canonized in 1690, and was a favorite of Father Junipero Serra. Serra, in 1776, gained permission to name one of the missions after Capestrano.

Today it is one of California’s most important historical, cultural, and educational centers. The Mission is the seventh of 21 Spanish Missions established in California by Franciscan Padres. Spain controlled California until 1821, when Mexico won its independence. In 1845, the Mission was sold for $710 to Don Juan Forster. His family lived at the Mission for 20 years. In 1865, Abraham Lincoln returned the Mission to the Catholic Church. In 1915, Mary Pickford was married in the Mission chapel.

Areas of interest within the Mission walls include early adobe barracks, Friars’ quarters, olive millstone, cemetery, aqueduct system, the beautiful gardens, and the original Stone Church. The Church was completed in 1797 and partially destroyed by earthquake in 1812.

The Mission has embarked on a $20-million preservation campaign to protect the historical landmark. Stabilization and preservation of the Great Stone Church and other of the Mission’s adobe buildings has been completed. In 2005, the Mission identified the conservation of Serra Chapel as its number one priority and has implemented a campaign to raise much-needed funds to preserve the Chapel’s significant features. Mission San Juan Capistrano is a non-profit historic site supported solely by tourism and gifts.

If you wish to rent a 12 or 15 passenger van for your trip to San Juan Capistrano, our passenger vans are easy to reserve. 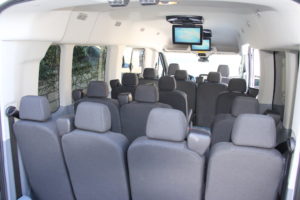 For more information about the city of San Juan Capistrano, please visit their website here.